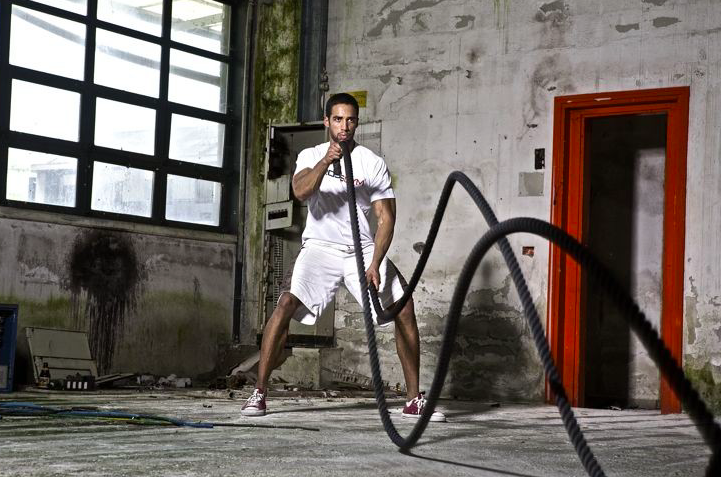 Battle ropes are an excellent way of conditioning athletes, incredibly popular in the fitness industry and there are countless YouTube videos with hundreds of Battle Rope workouts.

There isn’t too much research on battle ropes but here is some recent research into the effect of rest/interval length, unilateral/bilateral muscle activity & the metabolic cost of battle rope training.

Ratamess et al., (2015) investigated the difference in metabolic response with diff rest periods, comparing 1 min and 2 min rest periods. They concluded that battle rope exercise poses a significant cardiovascular & metabolic stimulus with the mean effects augmented with the use of a short rest interval.

The rest intervals chosen will influence the metabolic response – less rest = harder work, however the harder the work, the more chance of compensatory actions during bouts, ie trunk flexion.

Use big waves and allow ropes to move freely up and down to avoid trunk flexion, and get client to be in an athletic position, or as near as possible with hips flexed, knee over mid foot, feet shoulder width apart and symmetrical.

Interestingly no lower body work was used in this study, which points to trunk flexion occurring and muscle activity being increased in the Erector Spinae, which means the lower back will be doing plenty of work.

So, by not using leg action in rope training and allowing a client into trunk flexion significant stress is added to the lower back region, with more lumbar muscle activity being evident in the double arm waves than in single arm waves.

The authors concluded that both wave movements can be used to provide moderate to high levels of muscle activity in the AD, OBLIQ, and LUMB. and those aiming for higher OBLIQ activity should perform unilateral waves, whereas the bilateral variation of the movement can be used for higher LUMB activity.

Muscle activity also increased OBLIQ in bilateral arm waves (with no lower body work) as these will be working hard to stabilise the lateral shift in frontal plane.

So the take home here is to integrate leg work into the ropes, either double or single, depending on client/athlete’s capabilities and stay upright engaging the trunk muscles!

Fountains and Schmidt (2015) investigated the cardiovascular and metabolic cost from an acute 10-minute bout of rope training.

Significant O2 consumption, similar to with levels of blood lactate to Ratamess et al study on rest/interval length, mentioned earlier in this post and reported a strong aerobic and anaerobic demand on the system.

HR was significantly elevated more in female subjects than males – due to body mass differences, with the greater work being relative to the females lesser body mass, (greater the mass, greater the inertia!).

In their conclusion the authors suggested than an acute 10-minute bout of rope training in a vigorous-intensity workout, resulting in high heart rates and energy expenditure, which meet previously established thresholds known to increase cardiorespiratory fitness.

In short –  it may be prudent to incorporate lower body into rope work and minimise trunk flexion during the exercise intervals. The more muscles associated with the squat movement incorporated into the rope work will increase the metabolic cost of the exercise.

Minimise trunk flexion by encouraging correct posture using the athletic/base position. let the client/athlete feel it being a “core” exercise.

In reality coaches & trainers may have extremely limited time to spend with individual players, so this makes battle ropes an option when a conditioning is required but with limited time (or space!) to prescribe loaded movements.